It all started at Howie’s Artisan Pizza. I really loved their pizza crust. After buying a dough ball from them, I discovered how dough should feel in the hand: soft and malleable. In other words, I was not using enough water in my recipes. With this insight, I was finally able to crank out green onion pancakes (葱油饼) fairly consistently by relying on my eyes and sense of touch, instead of the measuring cup. Now, on to the naan.

I started with Mark Bittman’s naan recipe from How to Cook Everything.

I’ve made this a few times. Bittman has a specific order for mixing some of the ingredients (i.e., yeast, milk, yogurt and sugar), but I was even more minimalist by adding all the ingredients (except for the water) together in the food processor with no ill effect.

With 葱油饼, naan or pizza dough, getting the right amount of water is crucial. Too little and the dough is hard. Too much and the dough is wet and sticky. Better to get it right on the first try, than to tinker around and try to fix your mistakes. So, with the food processor running, stream the water slowly into the food processor until the dough comes together into a ball. The first time I tried this, I used warm water (like with 葱油饼) and the dough rose nicely. The second time, I tried making the dough in the morning with room temperature water and leaving the dough in the refrigerator all day to let it rise, as Bittman suggested. I’m not sure that the dough rose at all in the second instance, but the naan was just as delicious. 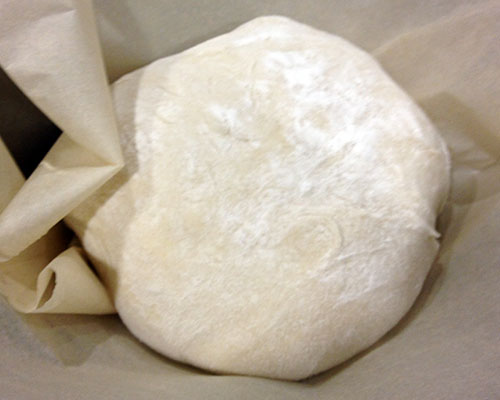 Instead of an oiled bowl, I usually just place the dough in a bowl lined with parchment paper. 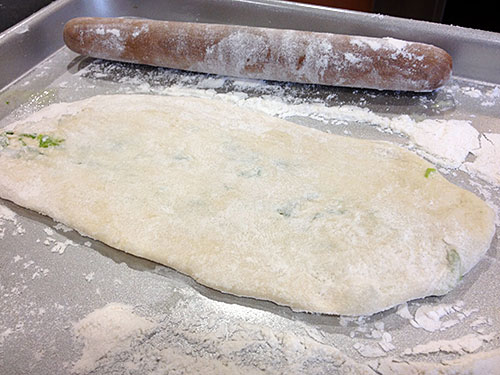 After the dough has risen (or not), I slice a wedge of dough and shape it. For that piece, I think I added some chopped green onions. 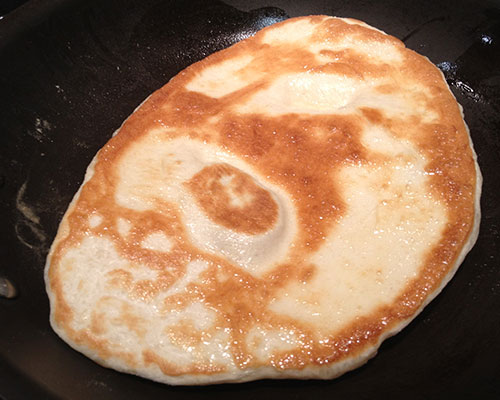 Here’s where I depart from Bittman. I have had no luck making the naan in an oven, even with a baking stone. The end result always ends up too dry. So, I tried it in a covered frying pan (just like with 葱油饼) with a touch of oil. 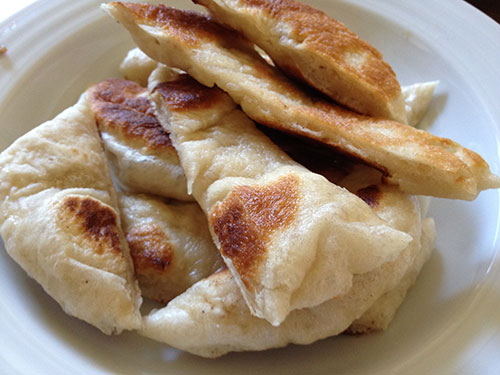 A touch of butter at the end is optional. Maybe this is not authentic naan, but naan “with Chinese characteristics.” Regardless, the end result was pretty close.