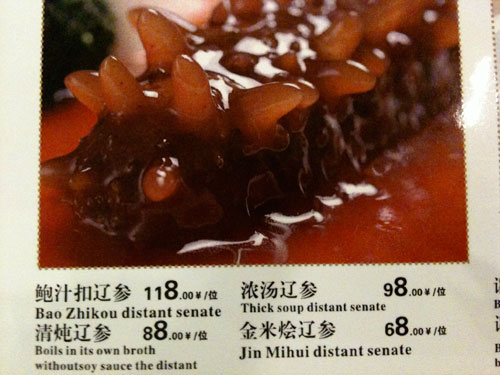 Thank goodness for the photo because I could not read the Chinese and the English was utterly incomprehensible. At first, I thought the dish was named after a Chinese senator named Bao Zhikou. It could be possible, much like how Dongpo Pork 东坡肉 bears the name of 苏东坡.

From the photo, the pièce de résistance appears to be sea cucumber and Google Translate confirms my suspicions with an obtuse translation of Bao Zhi buckle Sea Cucumber.

The better translation will interpret 鲍 as abalone and 汁 as sauce. As for 扣, Google Translate offers the following possibilities. As a noun, 扣 may mean button, discount, knot or ouch. In this context, none of these are correct. As a verb, Google Translate offers buckle, button, deduct, button up, pull, detain, fasten, arrest, place, press, or take into custody. These are all wrong as well. My best guess is that 扣辽参 means steamed sea cucumber because 梅菜扣肉, which is a favorite dish, is preserved vegetables with steamed pork. So, my translation would be Sea Cucumber in Abalone Sauce.

So, where does distant senate come from? Well, 辽 could mean distant or faraway as an adjective. Senate, according to Google, is 参议院, so there you have it.

As for the related menu items, 清炖辽参 could be translated to Sea Cucumber is Clear Broth. I can see how “boils in its own broth without soy sauce” would be one way to translate clear broth. Google translates 金米烩辽参 to Golden Rice Braised Sea Cucumber. Of course, 金米 literally means Golden Rice; however, a closer translation may be available. I just haven’t found it yet. I am 100% sure that Bao Zhikou and Jin Mihui do not refer to competing senators with dishes named after them.