While trying to find a campground at Sequoia & Kings Canyon National Park on short notice, I came across Eshom Campground, which had a camp site open for reservations. On Google Maps, the campground appears a short drive from Grant Grove. But, in this case, appearances can be deceiving. 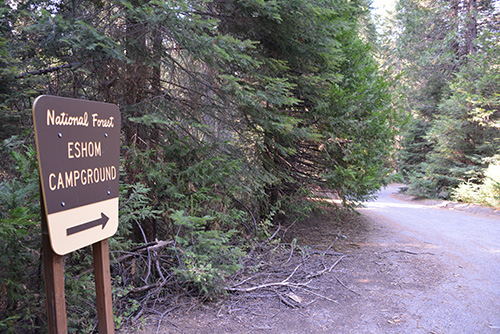 On the ReserveAmerica website, the location of the camp was given in GPS coordinates, which I had dutifully entered into the NAVIGON iPhone app before departure. I had fully expected to lose cell phone and possibly data connectivity in Sequoia and Kings Canyon National Park, and thought that I had a back-up in NAVIGON.

So, from Grant Grove, I was presented with two options. ReserveAmerica told me to back track along 180, then take 245 before turning onto Whitaker Forest Drive, which leads to the campground. On the map, this was the roundabout route. On the map, Forest Route 14S75 seems to provide the most direct route. However, (1) it is a dirt road, (2) the path suddenly turns extremely bumpy about half way down, and (3) NAVIGON got confused along the way and kept asking me to make a U-turn along a single path. So, the ReserveAmerica route is the sure thing, while the dirt road option is for the more adventurous, particularly since there is no signage along the way to indicate that you are headed to Eshom Campground.

I was in camp site #16, which was next to an open field. Although there were tall trees surrounding the camp site, I found enough of a clearing to take some night photos.