Last week, I received an ominous note from Intuit regarding Quicken, a personal finance product that I have been using for long, long time. 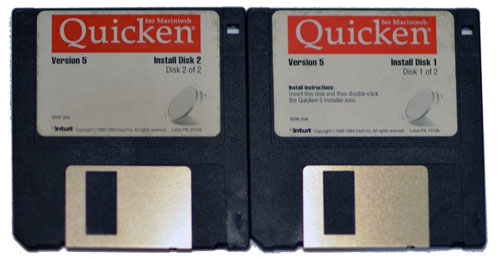 I can still remember when I first installed Quicken on the Powerbook 100. (The Powerbook is long gone, but for some reason I have kept the Quicken install disks in storage). I was immediately captivated with Quicken and proceeded to tell all my family members to switch to Quicken instead of using Microsoft Excel or Lotus 1-2-3 to manage their finances. As the years passed, I consistently upgraded Quicken until I reached Quicken for Mac 2005. I skipped 2007 and Quicken Essentials for Mac received disastrous reviews. So, I held off as long as I could.

After a pretty good run, I may have reached the end of the line with Quicken since Intuit tells me that Quicken for Mac 2005 is not compatible with Apple’s upcoming Lion operating system.

Since Intuit was offering a 50% discount for Quicken Essentials for Mac and a 60-day money back guarantee, I decided to take the plunge. I did not experience any problems migrating all my financial data to Quicken Essentials for Mac. However, the inability of the program to track investment transactions is a non-starter. I could look past the changed UI that displays transactions in one line instead of two, which makes Quicken Essentials look like a spreadsheet. (Gasp! If I wanted to use Excel, I would launch that app instead.) I could probably deal with transfers between accounts that are now recorded in a transfer field instead of the category field. But, the loss of investment transactions was too much to bear.

In 2010, the Macworld review for Quicken Essentials noted that a “promised Quicken Deluxe comes out next year” that may address the lack of investment tracking. But, we are into the second half of 2011 with no product in sight. I tried to pry some information from the Intuit support staff, but I couldn’t get any response other than phrases cut-and-pasted from the Intuit website. Since Quicken Essentials for Mac did not meet my needs, and I have no idea when an upgrade to Quicken Essentials for Mac or a rumored Quicken Deluxe may show up, I decided to give iBank a look.

At first glance, iBank looks more like Quicken than Quicken Essentials for Mac. Despite the superficial similarity, iBank does have some differences from Quicken. For example, categories work differently. In Quicken, I had to add a new category through “Lists > Categories & Transfers.” I could not find a parallel menu in iBank and found the solution by happenstance when I tried to type the new category in the category field. I actually like the iBank method.

I also liked the transaction search in iBank where I can enter a term in the search field and iBank instantaneously filters the transactions. Much faster than the Find and Replace dialog in Quicken.

This major bug has shaken my initial faith in iBank and wasted an inordinate amount of my time. I will be taking full advantage of the 30-day free trial period before I commit to Quicken or iBank. I like the iBank UI and feature set, but I cannot deal with maddening bugs like the above. For now, iBank is in the lead, but if I find another significant glitch, I might be returning to the tried and true Quicken 2005.