After having 干锅菜花 at a few Chinese restaurants, I’ve worked on a home version of my totally non-authentic dry roasted cauliflower. First, I start off with Chinese cauliflower, which I found available at selected 99 Ranch markets. I’ve been finding it consistently at the Cupertino and Mountain View stores, but not the Foster City one. 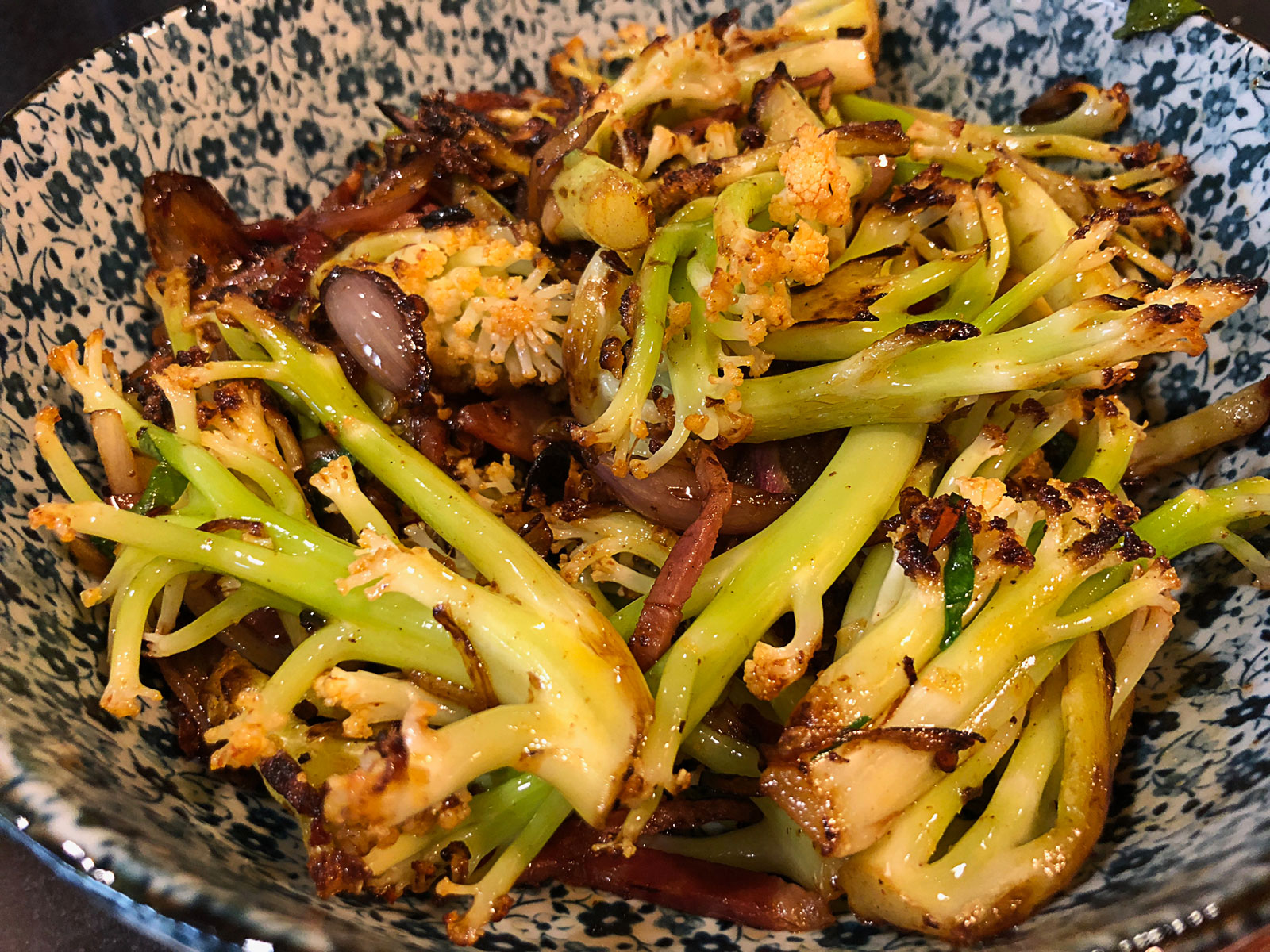 3. Add a thin layer of olive oil to the cast iron skillet. When hot, add the cauliflower. I leave the cauliflower alone for 5-10 minutes, allowing it to sear. As the cauliflower sears, I turn the pieces over and leave it undisturbed for a few more minutes. Repeat as needed. Once the cauliflower has been roasted evenly on all sides, remove it from the skillet.

I’ve been using the Hsin Tung Yang 新东阳 brand of Hunan bacon. I’ve found this in the refrigerated dried meats section at 99 Ranch and also in the dry goods shelves at Marina Food. I was perplexed, but the packaging states that it only needs to be refrigerated after opening. When refrigerated, the Hunan bacon gets hard and difficult to slice. Nowadays, I purchase a package of Hunan bacon and allow it to return to room temperature. I thinly slice the entire package and store it in a plastic food container in the refrigerator.

5. Add the roasted cauliflower to the wok. Add the shaoxing wine, soy sauce and sugar. For this dish, I don’t use measuring spoons–just a splash her and a splash there. After stir frying for 2-3 more minutes, I start taste testing.

First, I’m looking at the texture of the cauliflower. I want the cauliflower to be cooked, but still retain some crunch. I’ll take a bite and adjust my cooking times accordingly. Next, I’ll adjust the seasoning of the cauliflower to taste with more soy sauce or salt. Once the texture and flavors are to my liking, I add just a touch of chili oil. I recently started a new bottle of Hsin Tung Yang chili oil just for variety. I’ve also used the S&B La-Yu Chili Oil before. Each has its own taste, so use whatever you like.