For better or worse, iOS 6 brings a new Maps app. The 3D button offers a cool three-dimensional view of nearby buildings. The feature is much more impressive when browsing around the City. The 3D effect is practically unnoticeable in burbs of Mountain View.

I see two big changes in the new Maps app. First, the Maps app finally offers voice navigation. Initially, I was looking for some setting or button to enable this feature. There is none. Instead, just search for directions and voice navigation kicks on automatically. I tested it on the way home this afternoon and it was able to re-route as I took a U-turn to avoid traffic.

I already have the Navigon app, however I like the Maps app much better already. The strength of the Maps app is that it announces street names so there is no doubt which exit you should be taking or which street you should be turning on. Navigon has led me astray more than once because its directions were confusing. Navigon doesn’t announce exits or street names. It just tells you to bear left, bear right, turn left, turn right, etc., which is perfectly fine in a city with a grid layout. When that is not the case, Navigon is exposed. However, in remote locations, Navigon with its preloaded maps is incomparable. When you don’t have a 3G/4G connection, the Maps app isn’t going to help.

The other big change is the traffic data. Even with the traffic layer enabled, I am not seeing any data. The Maps app did indicate the 101 was red earlier this afternoon. In contrast, looking up Google Maps in Safari gives you the traffic data that the Maps app is missing. 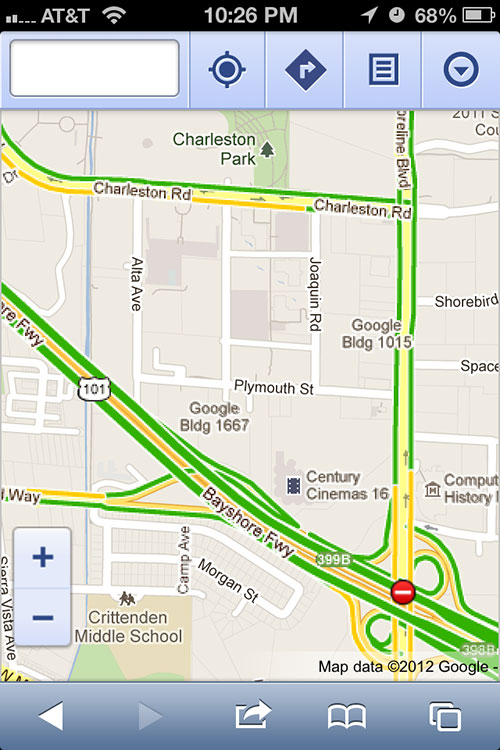 So, I will probably use the Maps app, unless I’m headed to a remote area with no internet connectivity.