Last weekend, I found a copy of Momofuku

by David Chang and Peter Meehan at the local library. It’s part autobiography and part cookbook with plenty of color and colorful language. While I’ve never set foot inside a Momofuku restaurant, I have read or heard quite a bit about their famous pork buns, so I decided to tackle that recipe first. 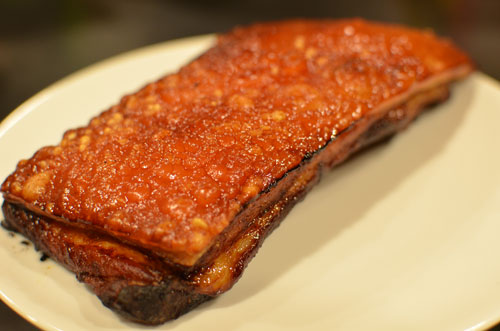 The roast pork belly was simple to prep and cook. However, being an experiment, I did not cook the requisite 3-pound slab of skinless pork belly. Instead, I started with a 1-pound slab of skin-on pork belly, which was quite decent in size. I thought I would end up with more than enough roast pork, but the original square slab of pork belly reduced to a rectangular package of caramel goodness while in the oven.

The tender pork was quite good, particularly when nestled between a steamed (store-bought) bun and accompanied by a smear of hoisin and shredded green onions. The first batch with skin-on was a bit too crunchy, so I removed the skin for the second batch. Needless to say, the port buns were well received. However, considering the amount of fat and oil that oozed out of that delicious slab of meat, I don’t see this dish making a frequent repeat appearance on the dinner table.

The ginger scallion sauce was also well done. I love adding it to rice, noodles, and just about everything else. I’m still searching for a recipe that I can make repeatedly. Someone of the other recipes (Pig’s Head? Seriously?) seem totally off-the-wall for home chefs. I have to test some of the other recipes to see if I can find something more practical that would justify buying the cookbook after I return this current copy to the library.