My favorite fish used to be Chilean Seabass. However, because of concerns over sustainability and mercury poisoning, I have been avoiding that delicious dish for quite a few years now. The great thing about the Chilean Seabass was that it was such a forgiving fish. Even if you slightly overcooked it, it remained juicy instead of instantly drying out.

During a recent trek to the local farmers market, I found some whole butterfish chilling in the ice bins. At about $5.00 per pound, these fresh butterfish were a deal. I have tried them steamed, deep fried and topped with home-made sweet and sour sauce, breaded with panko and served as butterfish sliders, and also broiled in a miso marinade. Since butterfish is just as forgiving to the imprecise cook as Chilean Seabass, we instantly bonded. My type of fish. However, my local farmers market comes but once a week unless I was willing to travel to different farmers markets just to procure fresh fish. I don’t have that kind of time. So, to satisfy that midweek seafood craving, I discovered the retail counter at The Fish Market. At first, The Fish Market confused me since they marketed butterfish as sablefish. But, over time, I recognized that these were interchangeable names. Butterfish may also be sold as black cod. All the same good stuff. The Fish Market sells fillets, instead of whole fish. The price used to be around $15.00 per pound, but lately had climbed to over $20.00 per pound. The butterfish is really fresh at The Fish Market. They have also thoroughly deboned the fish. When I want to make my panko-breaded butterfish sliders, I love working with the butterfish from The Fish Market because I don’t have to hunt for hidden fish bones. I have also found butterfish at Whole Foods. Again, sold as black cod or sable fish. Their fillets are not as thoroughly deboned as the ones from The Fish Market. Makes no difference if I am steaming or broiling the fish. After cooking the fish, the fish bones are really easy to spot and remove. However, for the sliders, working with deboned butterfish fillets just saves a lot of time. Price wise, Whole Foods was originally a bit more expensive than The Fish Market. However, after the Fish Market price increase, Whole Foods inched up to second place.

Anyways, broiling butterfish cannot be any easier. Previously, I was using the Grilled Miso-Crusted Butterfish with Three Caviars and Avocado recipe from the Roy’s Feasts from Hawaii

cookbook. Of course, without the caviar, avocado and a few other ingredients. Really hard to stock for a Chinese, Japanese and Western kitchen. Anyways, I found a simpler recipe for Misoyaki Butterfish at Feeding My Ohana. The end result was fairly similar. I probably will have to create two marinades and run a taste test when I’m feeling more ambitious. 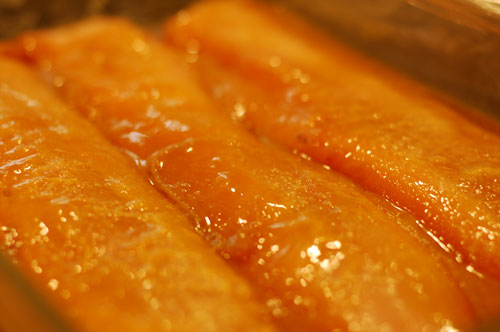 The lovely butterfish from Whole Foods after sleeping all night in the miso marinade. 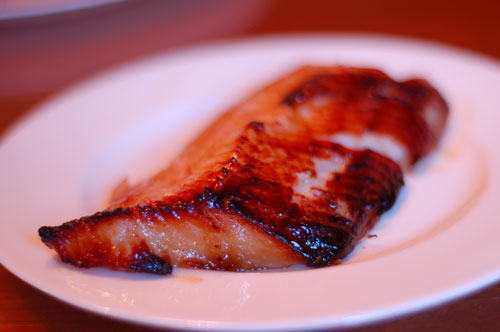 Misoyaki Butterfish after about six minutes under the broiler. The timing in the oven is key. You have to watch the broiler closely so that the miso marinade on the fish gets caramelized, but not burnt. The crisp miso crust is the tastiest part of the fish.