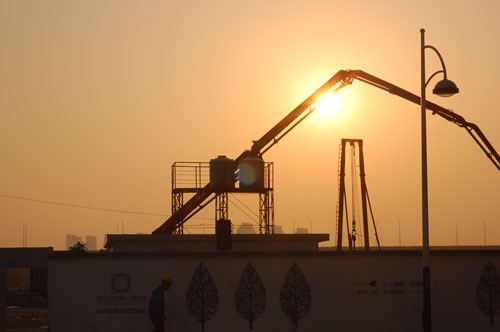 I first visited China almost 30 years ago. Back then, China was defined more by its past than its future. Everything that amazed me during that initial trip had an age that could be measured in centuries if not millennia. During that visit, the economic gap between the United States and China could not have been more self-evident. At each stop light, the drivers would turn off the engines of their cars, whose design came from another era, presumably to conserve gas. The Friendship Store was not really that friendly, and sparsely stocked to boot. And, foreigners visiting the standard tourist attractions had to pay the higher outsider price not in 人民券 (RMB) but in 外汇卷.

Alas, those were the days. Now, repeat visitors, including me, witness in amazement not how old China is, but how new China has become. What defines China today is not the Forbidden City or the Great Wall, but the ever present construction cranes that stands sentinel in every major metropolitan area. While the United States is mired in a recession that has stifled its construction industry, China is busily building away. Mind you, construction in China does not occur a building at a time. Instead, it goes block by block. Absolutely breath taking. What really is amazing is the pace of urban sprawl. As each city expands and absorbs the surrounding areas, the line between the city proper and the 鄉下 slowly blends away, such that it can become indistinguishable. Furthermore, homes in the countryside are no longer distinct from their urban counterparts. Once you have electricity, water, gas and telephone service, the living conditions between city and rural folk become more similar than different. I also noticed a lot of solar hot water installations perched above homes in the countryside throughout China. Plus, electricity and telephone service = internet access! The last place I expected to find a computer and internet access was in the 鄉下, but there it was even if you cannot access Facebook inside China.

I also had the opportunity to ride on the Shanghai and Beijing subways, both of which offer an experience similar to the Hong Kong subway. Riding a Chinese train also was a pleasant endeavor: modern, air-conditioned, clean and comfortable. An absolute delight.

So, what are the short-comings? Traffic, pollution and smoking. Yeah, we don’t have an answer to the traffic problem in the United States, so the Chinese cannot look to us for solutions. But, China’s traffic problem is two-fold. Not only are the roads congested, but the way people drive leaves much to be desired. That unyielding chaos and the constant honking of horns frightens both passengers and pedestrians alike. As for the smog, absolutely disgusting. I could not take a proper photo in China because of the persistent haze. Mind you, this is not the LA type of haze that is only noticeably when viewing objects afar. Chinese haze obscures buildings a block away. If you keep thinking about all the particulate matter you are inhaling while in China, it will give you quite a fright, so don’t think about it. Finally, despite all the no smoking signs and no smoking posters displayed in preparation for Expo 2010, smoking was every where: in restaurants, in hotels, in enclosed elevators (with no smoking signs), in hotel rooms, etc. 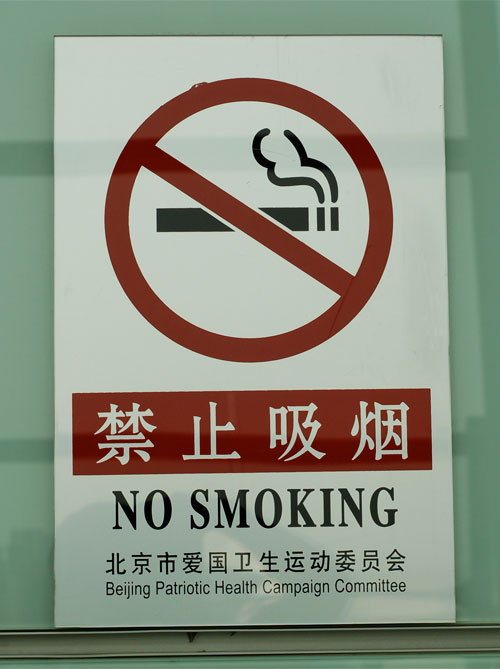 Of course, China offers a unique way to promote “No Smoking”: a placard from the Beijing Patriotic Health Campaign Committee. Bravo China. Next time I return, I really want to see no smoking in public places.